OMG the misunderstanding is cleared up in a mere three episodes!  Suna is the bro-est of bro's when he causes Yamato to confess to liking Takeo when Takeo is hiding (under the bed, not sure how he fit under there).  The relationship between Takeo and Suna is almost more important that Takeo and Yamato in this episode.  Takeo muses on how great Suna is after realizing Suna dissed all those girls who confessed to him because they talked smack about Takeo behind his back.  Way to go, man.  The question is, where does the story go from here?  I expected the misunderstanding to drag out to at least episode eight! 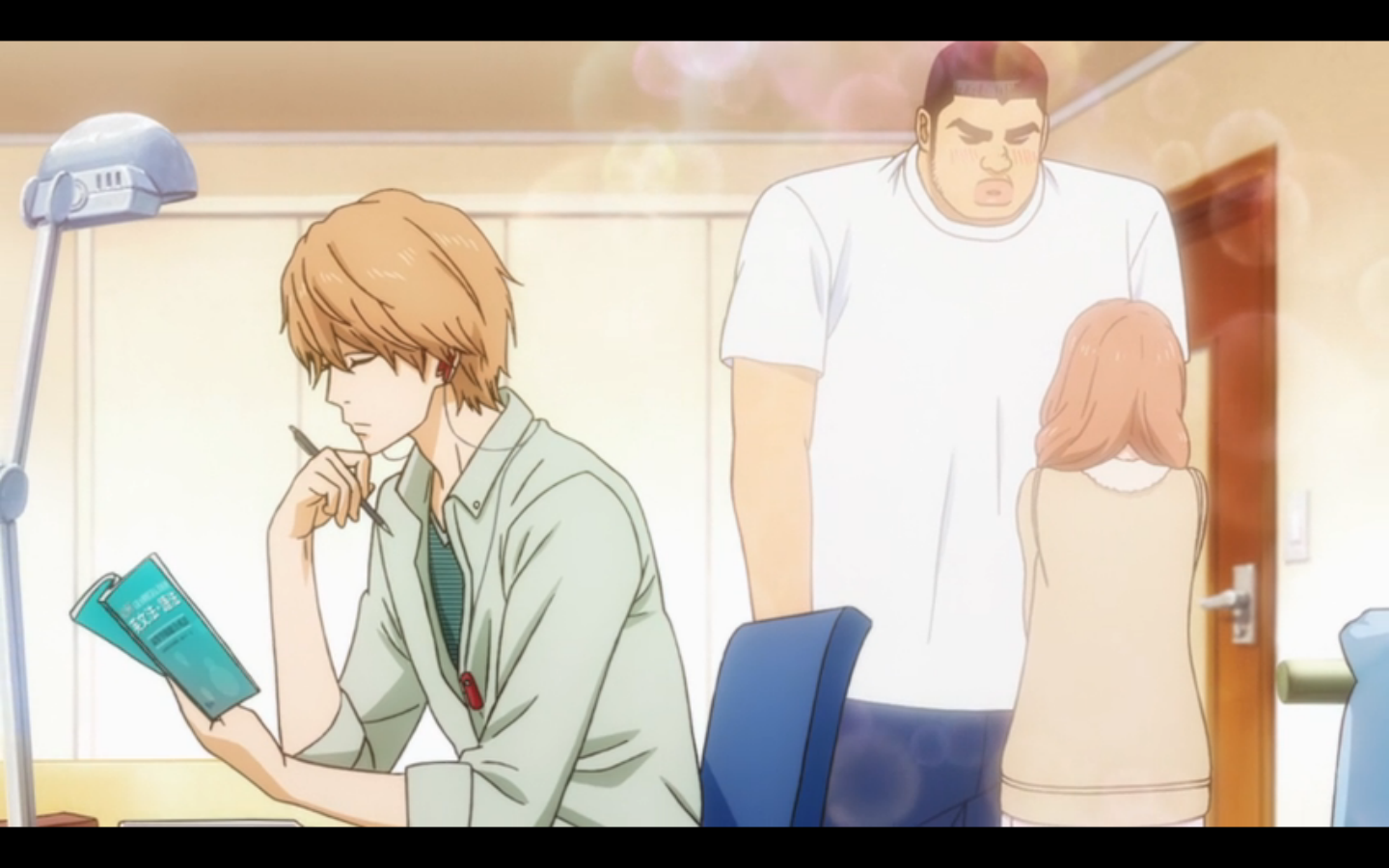 Posted by 3mapletrees at 5:39 PM No comments:

It's a charming story of Gouda Takeo, an unlikely protagonist of a romance anime.  He's big and tall, and not very handsome, but very straightforward and kind, though a bit hotheaded.  His best friend Sunakawa Makoto (aka Suna) is very handsome, so handsome even grade school girls do a double take when he walks by.  All the girls Takeo ever liked always liked Suna instead.  But Suna ruthlessly turned them all down. 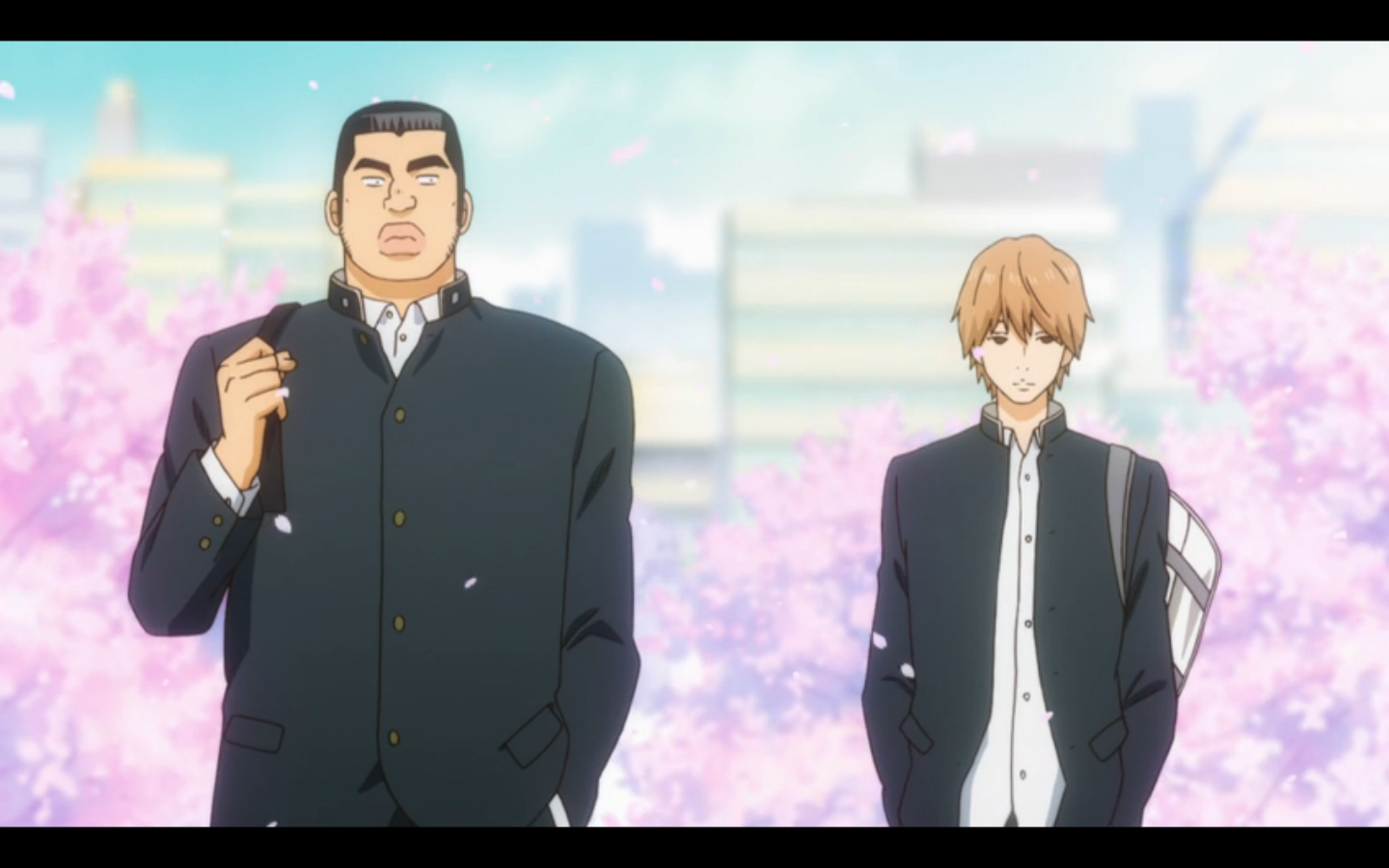 One day on the train, Suna alerts Takeo to a suspicious man.  Takeo sees the man groping a high school girl and saves her.  She is Yamato Rinka who is just Takeo's type.  He instantly falls in love.  She is grateful and visits Takeo at home while Suna is visiting.  Takeo automatically thinks Yamato actually likes Suna. 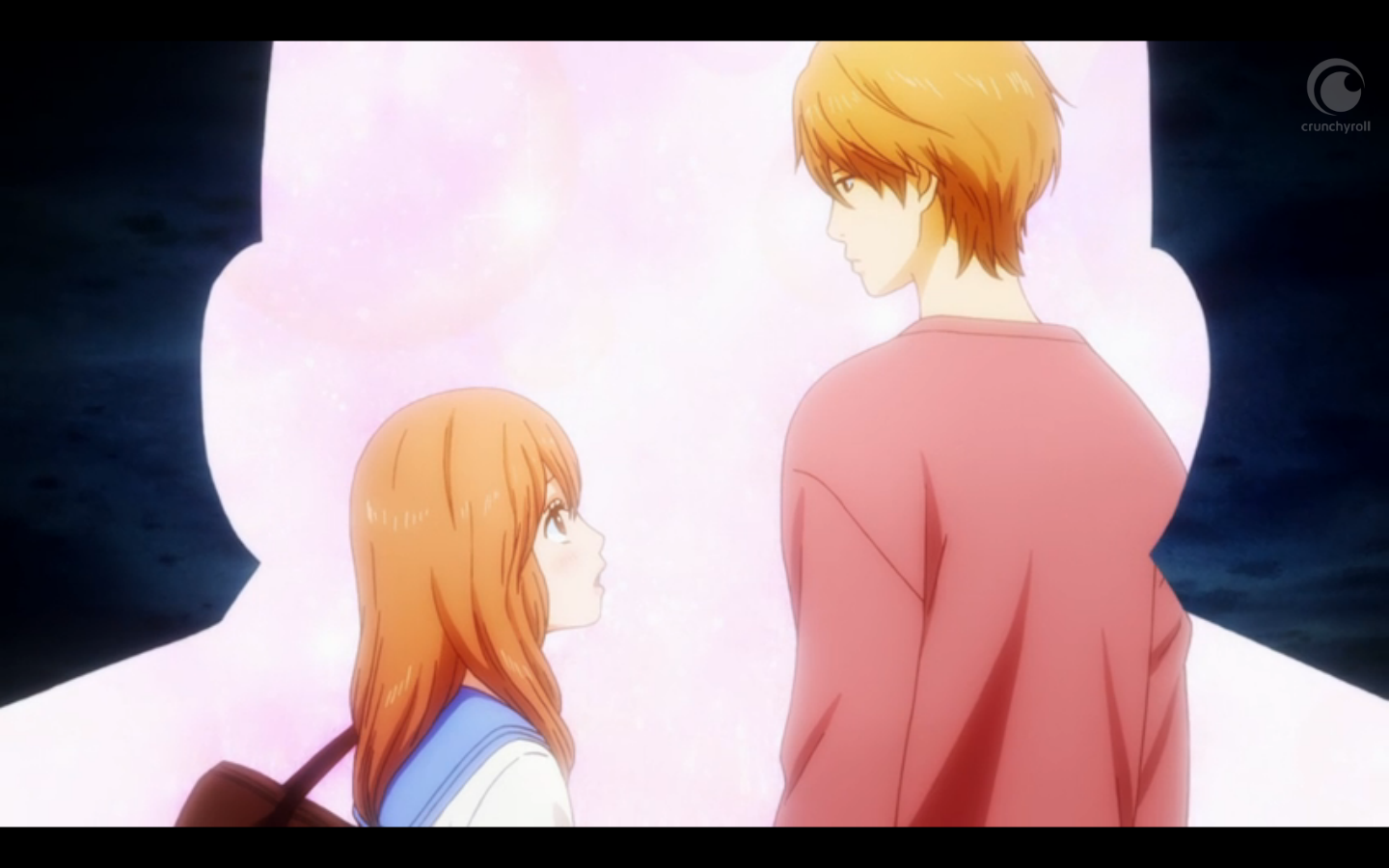 Takeo, being the bro that he is, decides to let go of his feelings for Yamato, and try to matchmake her and Suna.  Yamato, however, keeps inventing reasons to meet up with Takeo, mostly involving homemade sweets.  Takeo invites Suna along each time, thinking she's actually into Suna. 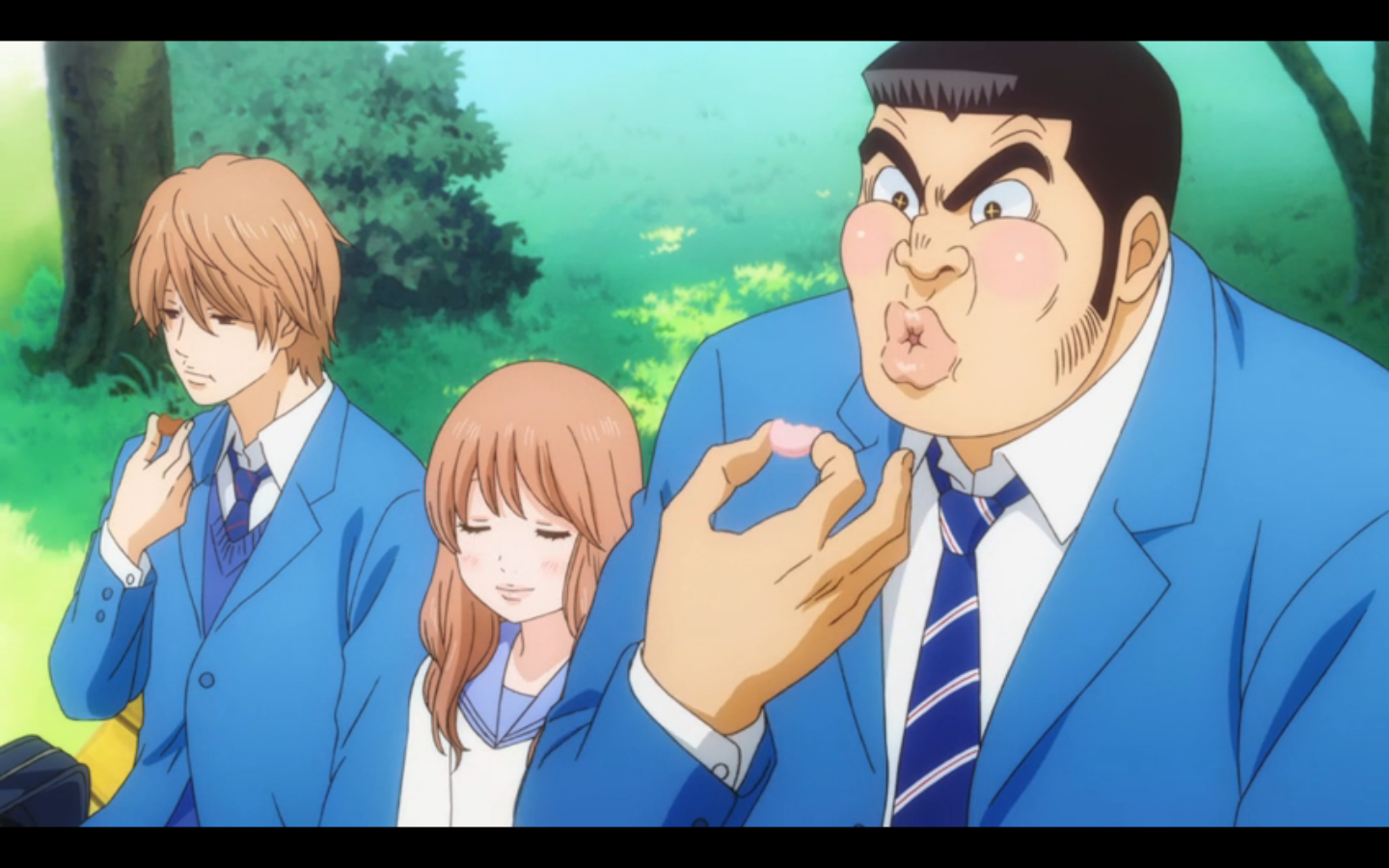 A funny part of episode two is when Takeo is trying to find out what kind of girls Suna likes. But Suna's answers are a little vague. 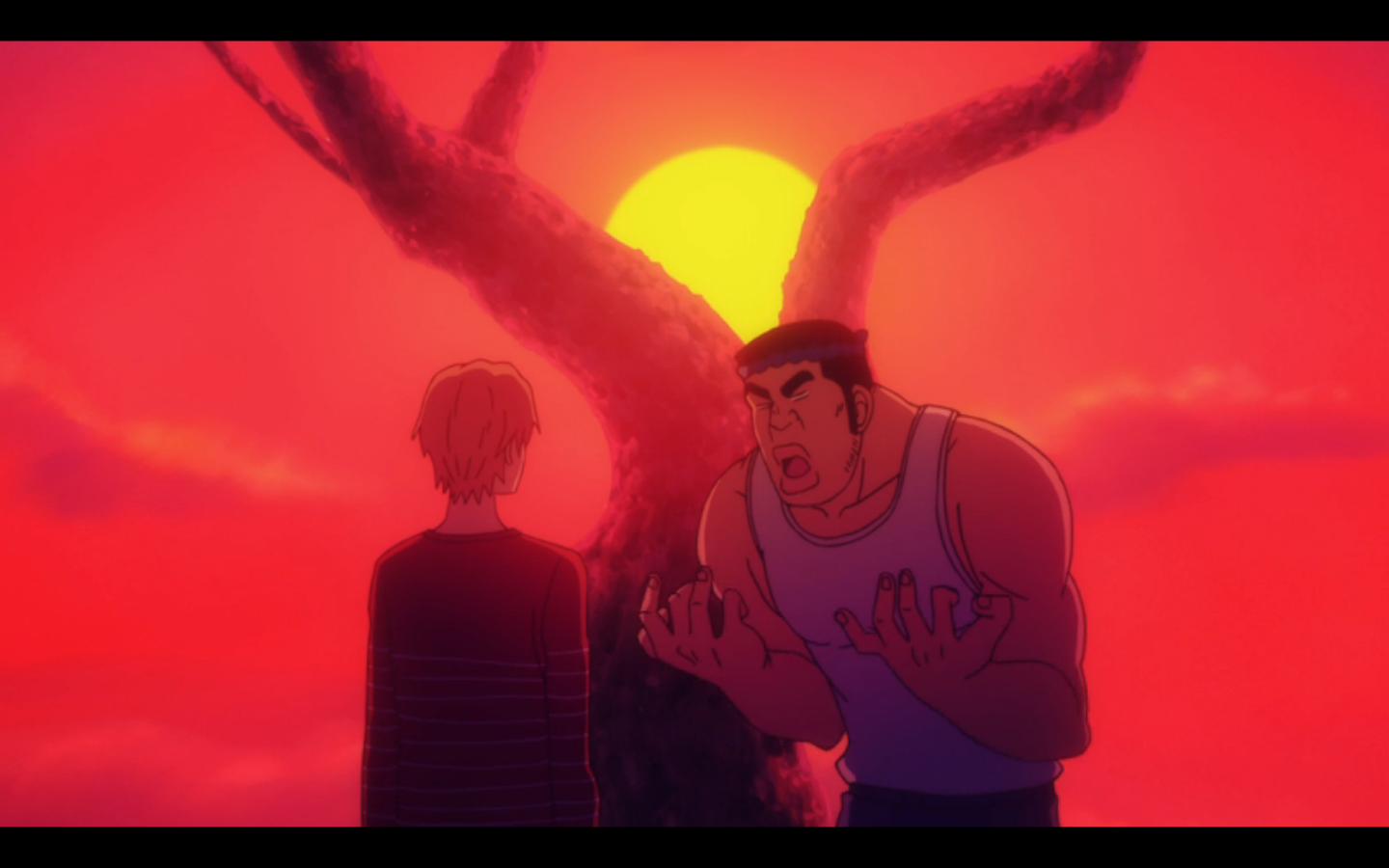 One part of episode two that was strange was when an iron construction beam falls and Takeo catches the beam to save Yamato.  That is a bit of a trope, but it does offer the opportunity for Takeo to save Yamato again.   Suna and even Yamato help Takeo with the beam and don't just bail.  Seeing Yamato try to lift the beam causes Takeo to go superhuman and throw it off of him like a boss. 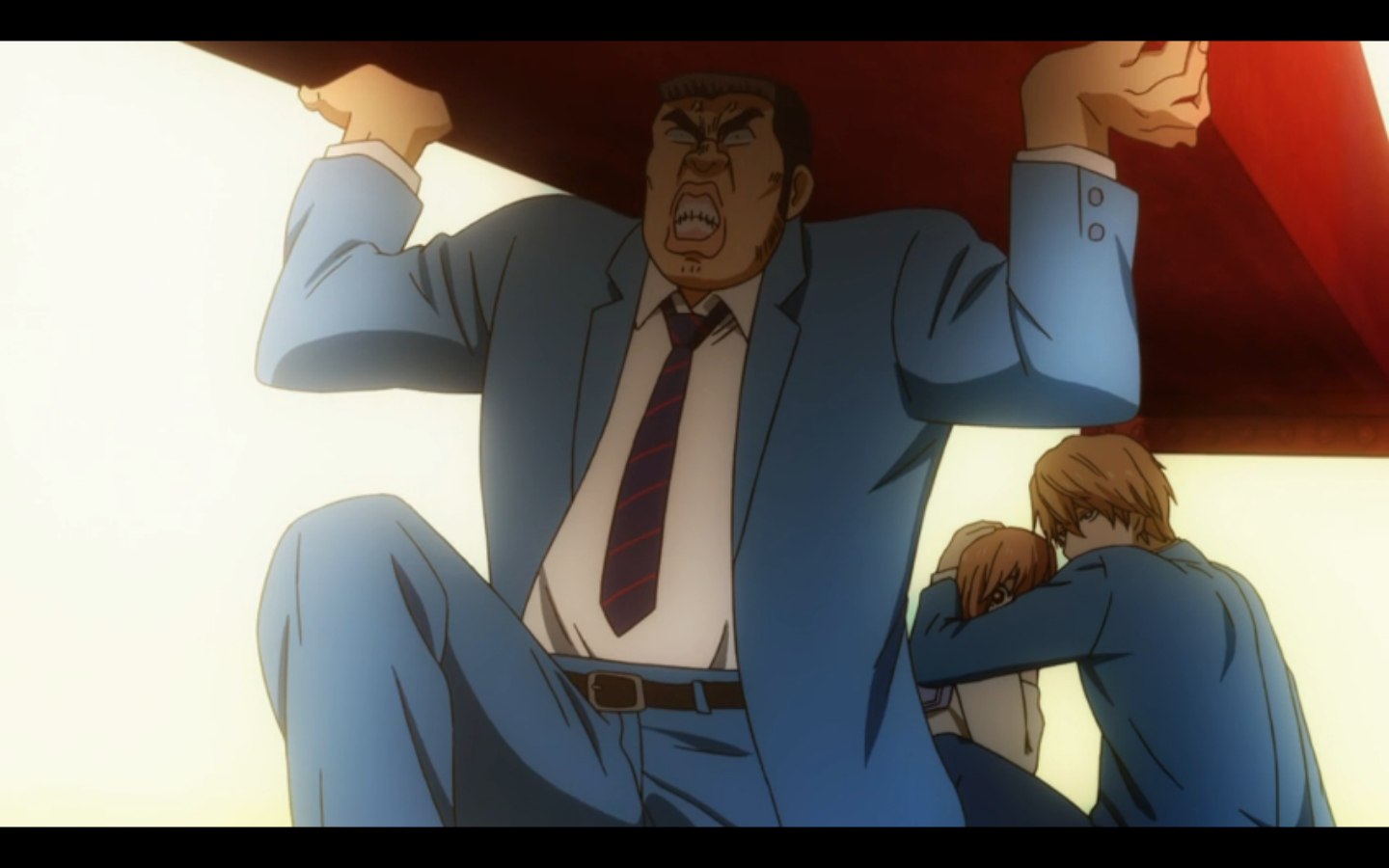 Finally, Yamato invites Takeo to meet again, but specifically WITHOUT Suna.  Takeo, being the dense nice guy, thinks it's just for love advice.  Hope Takeo puts two and two together soon!  I have a feeling Suna does really actually like Yamato though...  The triangle begins?
I like the simple art style.  There is not much motion in the story, but I like how there are little "air thoughts" sometimes that add comedy.  Suna is a fox and he looks like Taichi from "Chihayafuru" so he is eye candy (falling for the surface again like the grade schoolers).  The voice actors for Takeo (Takuya Eguchi) and Suna (Nobunaga Shimazaki ((Haru! from "Free!")) are excellent.
Posted by 3mapletrees at 11:57 AM No comments:

"Parasyte" was almost appointment anime.  Each episode ended in a very effective cliffhanger which made me think "No! Don't stop there!"  There was a sense of horror since there was the "Invasion of the Body Snatchers" component since the parasites were indistinguishable from the humans.  (Although they all DID have the that dead-eyed look... and were eating people.)  Shinichi the main character struggles to protect himself and his loved ones while coming to terms with his situation of becoming "more than human" after becoming host to a parasite he later names Migi.  The ending of the show is a little flat, and it is still unexplained as to where the parasites came from and where they ultimately went.

"Yowamushi Pedal" season two stretched out the inter-high bike road race to forever and a day, but it was all worth it.  We get to spend time with cyclists from at least four different teams as they all struggle to win the three day race through the mountains.  Onoda is pure sunshine the whole time.

"Aldonoah Zero" was a hot mess.  It looked great, but didn't make much sense.  I found it difficult to follow the mecha battles, but they were pretty.  I like the character designs by Takako Shimura, the mangaka for "Wandering Son."  **MILD SPOILERS** -->>>>>
(-->>>The subtitle for this show could have been "Let's torture Slaine."  I still feel sorry for him.  He got the worst deal out of everyone, even Inaho with his injury.)

"Shirobako" was a delight.  At first I thought this was a silly slice of life show, but it turned out to be a revealing look at the workings of a real anime studio as it struggles to make a quality anime ON TIME.  Best part was watching the relationships of between the characters.  Credit to great writing.

"Yona of the Dawn" was a very pretty shojo fantasy anime.  Yona is a princess who escapes the palace after her father the King is murdered.  While fleeing for her life, she realizes how sheltered she was and it wakes her up to the realities and injustices of the world she never knew.  She also meets up with her predestined support crew of four handsome men who embody dragon spirits. The story of the Blue Dragon made me tear up.  Solid action show, with eye candy for the ladies.  It never falls into reverse harem mode, since it's very obvious she has eyes only for Hak, her loyal bodyguard.

"Your Lie in April" is gorgeous looking anime, that really tugs are your heart strings.  It is a bit manipulative, but what do you expect when one of main characters has an unexplained illness.  Kousei is piano genius, but is psychologically unable to play due to trauma involving his deceased mother.  Kaori sweeps into his life like a hurricane, and encourages him back to his music.

"Shonen Hollywood" is a strange but soothing anime.  Five male teenage idols struggle to find themselves as they navigate the suprisingly hum drum lives of an idols-in-training.  It's not the flashy "UtaPri" you may expect at all, but a mellow show that makes you relax rather than fangirl.

"Jojo's" continues to be awesome.  Each show usually has at least one outrageous WTF moment that makes you LOL.  Joseph is still my fave character.