I am impressed with the fact that this group has released three versions of "Perfection."  I think I like the Mandarin one the most.

I intended to follow more shows from the current season.  However, I find myself watching only these, "No. 6," "Mawaru Penguindrum," "Natsume Yujincho," and "Usagi Drop."  "Blue Exorcist" is one I've dropped.  I try to catch up whenever I can't find anything else to watch.  "Tiger and Bunny" was funny, but I didn't keep up with it, I'm not sure why.  "Mystic Archives of Dantalian" is one I really wanted to like, but I can't get past episode one.  I even fell asleep one of the the times I tried to watch it.  "No. 6" keeps me wondering what's going to happen.  I usually like the dystopian future type of story which the show is all about.  The uncomfortable-to-watch relationship between the two lead characters give it another dimension that I find enjoyable.  "Natsume Yujincho" is a tear-jerker this season.  It gives you a warm and fuzzy feeling after you watch it.  "Usagi Drop" is beautifully colored and has a relaxed and innocent feel.  The relationship between the girl and her guardian is sweetly depicted in simply plotted episodes. Now that I've written this, four shows seems plenty to follow.
Posted by 3mapletrees at 11:38 PM 1 comment:

I thoroughly enjoyed this episode.  Shu is jealous of Ren, Ren is jealous of Shu, and Yuki (Jeremy in kdrama) is totally confused about his attraction to Mio.  It is heartbreaking every time Shu sees Mio falling for Ren, and that's a lot of reaction shots.  The best part of the episode is when Mio sings "Without Words" in the recording booth and cries at the same time.  Takimoto Miori is rivaling Park Shin Hye in cuteness as the cross-dressing singer.  She has a good voice and her acting seems earnest and heartfelt. Yaotome Hikaru  as Yuki  is growing on me.

This show is gorgeously animated.  The art style is modern, the guys are handsome, the colors pop, and the penguins are damn cute.   The animation, especially in the extremely long chase scene at the end, was very well done.  Improbable, but exciting.  I don't understand the story yet.  It reminds me of watching "Star Driver" because I was pretty lost during that show too.  I think the absentee parents  have something to do with this mysterious item the "Penguin Hat Queen" is looking for,

I find myself enjoying this drama very much. Except for the first episode, the second and third episodes are following the kdrama closely, just in a more compressed way. Shin Woo, oops, I mean Shu, has started to carry the torch for Mio and does the almost-date-by-phone with Mio wearing a similar outfit from the kdrama: 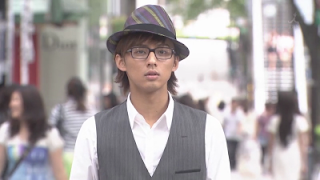 Yuta Tamamori who plays Ren is extremely cute and he has good chemistry with Miori Takimoto who plays Mio: 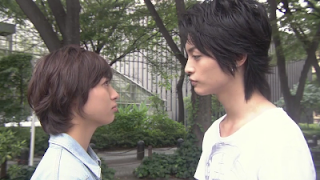 I haven't watched many jdramas lately.  But its picking up!  I'm still trying to keep up with "Hana Kimi 2011" and have also been watching "IS" which is turning out really interesting.  It's about a teenager who is an "intersexual" which means has both male and female organs in some ratio.  The main character Haru looks like a girl and goes to high school as a girl, but identifies with being a boy.  Haru struggles with the secret, but it seems Haru's other friends have their own secrets too.
Posted by 3mapletrees at 11:26 PM No comments: