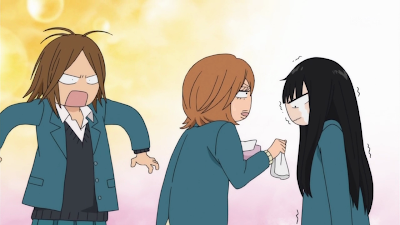 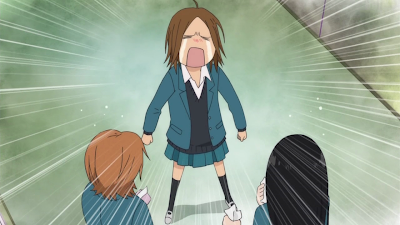 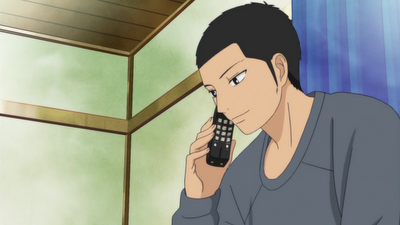 I shed a tear myself in this episode about Chizu finally showing some anger/sadness at the whole situation and at insensitive (but still cute) Ryuu. It was funny to see Sawako finally break under the pressure and sob at Chizu's cheerfully brave demeanor. Can't wait to see Ryuu string a few words together to confess to Chizu.
Posted by 3mapletrees at 11:47 PM 1 comment:

I like this ending credit song for "Durarara!!" Plus Matsushita Yuya is hot. I think he's a fan of MJ... 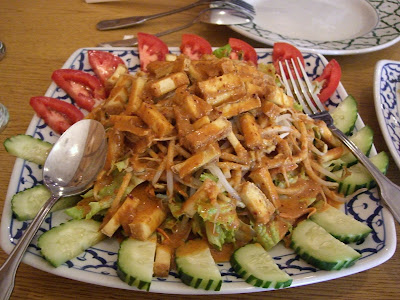 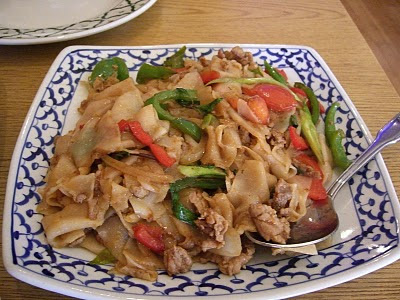 Visited Ruen Thai Restaurant in Roseville, CA recently and took the opportunity to take 2 pictures of the food I ate with my friend. I give a thumbs up if you're in the area. The Thai iced tea was also very good. The top picture is the Ruen Thai Salad (green lettuce, tomato, cucmber, onion, cooked bean sprouts, tofu topped with peanut sauce). The tofu almost had a chicken like quality since it was deep fried. The bottom picture is Pad Kee Mow (stir-fried rice noodles with sliced meat (pictured is pork), onion, tomato, bell pepper and basil leaves). Picture chow fun with a lighter, fresher taste. Both plates were clean when we were done. I'm getting hungry writing this post.
Posted by 3mapletrees at 9:52 PM No comments: 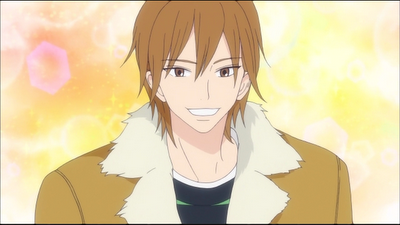 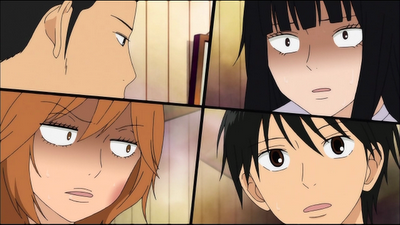 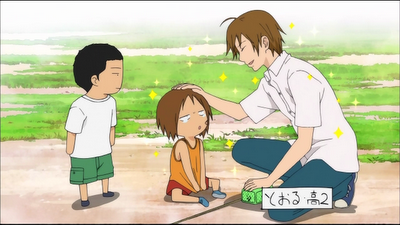 This was one of the best episodes in the series. I think my heart broke a little with Chizu when she heard/saw the news. Everyone's reaction was really in character. Chizu puts up a strong, cheerful front. Ayane is supportive. Sawako is sympathetic and confused about how to help her friend. Ryuu is worried and closed mouthed. Kazehaya is sensitive and supportive in his guy way. I liked seeing Ryuu and Chizu in the third grade too. I love this show.
Posted by 3mapletrees at 11:26 AM No comments:

"Neon Genesis Evangelion"-- I Can (Not) Understand


I really like this opening.
SORT OF SPOILER ALERT!!!
Okay, after all the hype about the "Rebuild of Evangelion" movies lately, I finally decided to watch the original 26 episode TV series from 1995. It starts out with slowly with 14 year old Shinji Ikari reluctantly recruited as a pilot of the biomechanical "EVA" (aka giant robot) pilot. He has to save the world from the "Angels" (aka giant monsters) from which I'm still not certain whence they came, by fighting them with his robot to prevent them from making contact with the hidden "Adam" (another Angel? or something else) somewhere in an underground military base beneath Tokyo to prevent the occurence of the "Third Impact" which would probably kill everyone on earth. Whew. It's a big downer at first since Shinji is a big wimp. It gets better when he gets more confident and makes some friends finally. Then the story goes deep into psychological analysis with Shinji, the other pilots, and the scientists behind the whole EVA thing and ends with a big WTF unsatisfying ending. I even watched "End of Evangelion" 1997 movie which supposedly makes the ending of the TV series clearer. It's better but it still ends with a lot of interpretion and questions. Pluses: Cool looking Angels and EVAs, likable flawed characters, challenging ideas (why are we here? why should I be alive?), interesting Christian references. Minuses: Incomprehensible plot, the ending! Overall: I'm glad I watched it just to have seen something from the anime canon that I can see is referenced in a lot of newer shows like "Bokurano." I'll probably end up getting the "Rebuild" movies and get disappointed again :p
Posted by 3mapletrees at 11:19 PM No comments: 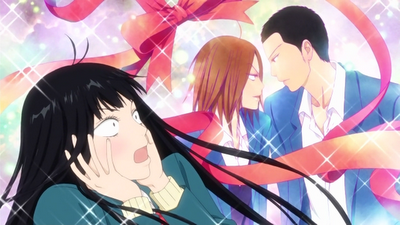 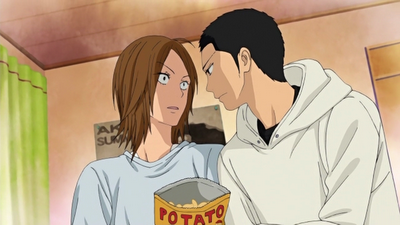 I LOVED this episode since we get to see more of Ryuu x Chizu! It's so sweet when we find out Ryuu already knows Chizu likes his older brother. I have this feeling Tooru will have a thing for Ayane :(
Posted by 3mapletrees at 6:28 PM No comments:

I just tried the free and short color career counselor test here: http://www.careerpath.com/career-tests/colorcareercounselor.aspx
And it seemed to be pretty right on, even listing my current occupation in the "Best Occupational Category." I don't know if I'm doomed or what to be in this job!
Posted by 3mapletrees at 11:40 PM No comments: 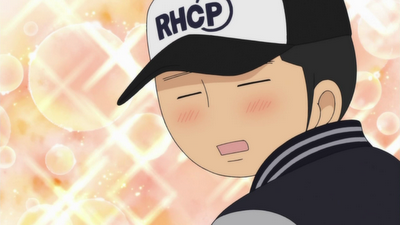 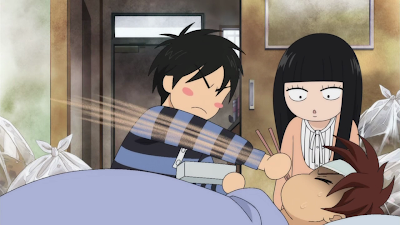 Another great episode with the whole gang just hanging out away from school. I loved how Pin and Sawako misunderstand each other completely. I also loved how Ryuu was so enamored with Maru the dog and with how Sawako's father eventually comes to like Ayane and Chizu after becoming alarmed by their looks. It was also cute when Kazehaya does all the nursing of Pin to block Sawako from doing it. Ah, a Kurumi-free episode, yay!
Posted by 3mapletrees at 9:55 PM No comments: