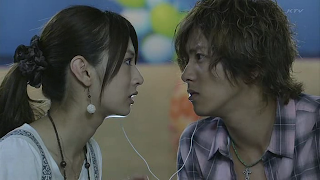 Just finished watching final episode of "Buzzer Beat." It kinda ran out of steam in the last episode, but it's still fun to watch. Riko and Naoki's separation is kinda forced but necessary for the final climactic reunion. The cheating ex-girlfriend is well played by Aibu Saki (Riko from "Absolute Boyfriend") who manages to do "sympathetic bitch" pretty well (haha). I really liked the actress who played the Riko the lead Kitagawa Keiko. She is so pretty and wears these skinny jeans through the whole thing (hate her) but can't deny she's way pretty. As for Yamapi, I can see his appeal, but yeah, his frizzy dyed curly hair is not a good look. Oh yeah, I learned about downloading RAWs and getting the .SRT subtitles from trying to get episodes 7 through 11 because they are hard to get hardsubbed at this point. Learned something new just to finish this show! That's how much I enjoyed it.
Posted by 3mapletrees at 8:54 PM No comments:

Conan and Andy... Back for More

I started watching the j-drama "Buzzer Beat" which stars the famous Yamapi (Yamashita Tomohisa). It has a good ensemble cast, including the female lead of "Absolute Boyfriend." There are plenty of cute actors playing professional basketball players. The basketball action takes a backseat to the romances of the show, and there are plenty of pairings to go around. I really like the actor that plays the coach Ito Hideaki. So cute! Anyway, i'm only through with episode 2, but I'll hang in there. It's kinda hard believing Yamapi could be a pro player, but I'd rather watch him in a romance than (insert any NBA player.)
Posted by 3mapletrees at 12:33 AM No comments: 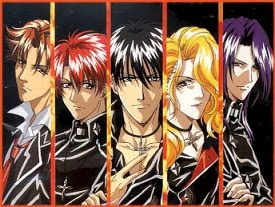 "Kaikan Phrase" is a really old shoujo anime from 1999-2000 about a band called Lucifer which is composed of five hot guys including the charismatic bad boy lead singer Sakuya. The manga is popular too, but I haven't read it. The first part of the anime is about how the band gets formed, and the second part is about their career as signed band and their new high school aged girl lyricist. I'm at episode 30 and there is 44 in total. The art style is dated, but I still like it. I also like seeing the "realistic" (for anime anyway) situations about trying to be successful in a band. It's a lot of "lets' get together and put on a really good show!" a lot of the time which is corny but kind of uplifting when you are feeling cynical. Plus I really like Sakuya, the bad boy who rides a motorcycle, composes music, and sings lead vocals. You get to hear the song "Datenshi Blue" about a million times, but it's not a bad song.
Posted by 3mapletrees at 6:46 PM No comments: