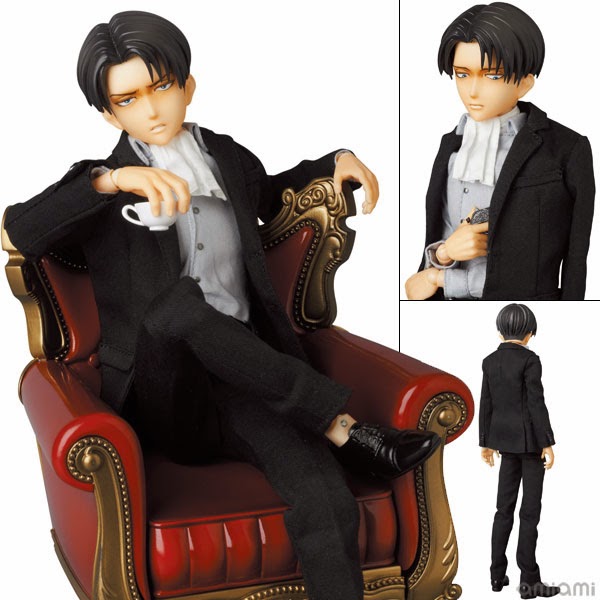 Real Action Heroes No.697 RAH Attack on Titan - Levi (Suit Ver.)(Preorder)
Only about $195 USD (sarcasm).  From what I can tell from the store pictures and description, he has 5 different looks of disdain from his eyes and 2 different mouth expressions to express all that disdain.  Also included are the armchair, a full teacup, a black book, and a pistol.  He does look snazzy in a suit.
Posted by 3mapletrees at 4:42 PM No comments:

Movies I rewatch when they come on TV

"Dolores Claiborne" -- I remember actually seeing this in the movie theater and being really bummed out watching it.  It's not a feel good movie by any means.  Kathy Bates is unattractive and generally unlikable through the whole movie.  The movie (except in flashbacks) seems to have a dark blue filter over the whole thing making it even more dreary.  But it's a compelling drama.  You realize when Dolores went through her whole life to make a good life for her daughter.  The dialogue is very Stephen King-like which is not a positive, but this mystery/drama has a heart under the blue filter.  I think Kathy Bates was better in this than in "Misery."

"The Shawshank Redemption" -- Another Stephen King adaptation.  The narration by Morgan Freeman turns the movie into a modern fairy-tale.  Not a lot of chuckles in this one either.  Andy (Tim Robbins) crawls through a river of... well you know what... and gets sweet revenge while maintaining a lifelong friendship with Morgan Freeman's character, Red.  The ending is one of the best endings in movies.

"The Mummy" --  Brendan Fraser and Rachel Weisz star in the cheesiest of movie monster movies and its a heck of a good time.  The movie seems to know its just a fun romp and keeps a good sense of humor while chugging along a breakneck pace.  The special effects are pretty well done and still look pretty good for today.  Imhotep...

"Sling Blade" -- Billy Bob Thornton does a lot with his seemingly emotionless character Karl.  Dwight Yoakam is excellent is the sleazy boyfriend.  Young Lucas Black is incredibly likable as Frank the young boy.  It's the friendship between Karl and Frank that holds the movie together.  By the end of the movie we understand what Karl felt he had to do.  John Ritter has a small but memorable role.

"The Da Vinci Code" --  Another movie that has a blue filter over all of it.  Tom Hanks and Audrey Tautou flee over Europe to find the Holy Grail.  The story is a bit muddled, but the music, the two leads, and the whole idea of finding the Holy Grail always gets to me.  It's another not feel good movie, and its a downer of a thriller, but the end where Tom Hanks is walking toward the Louvre always gives me the chills.  I think its mostly the music.

"Contact" -- A Jodie Foster science fiction movie?  Yeah, and its pretty good.  I like how the mystery unfolds about first the sounds, then the pictures, then the machine... but the end kinda sucks.  But Jodie Foster is likable and Matthew McConaughey is a young hottie in this one.

"Clueless" --  Alicia Silverstone and Paul Rudd in a "Emma"-style story.  Finally a romantic comedy on this list.  This story of a spoiled rich kid and her well-intentioned but misguided matchmaking is full of good writing and Alicia Silverstone really does a good job as Cher. Plus love that the song "Tenderness" by General Public plays at the end.  Love the 80s.
Posted by 3mapletrees at 11:39 PM No comments: