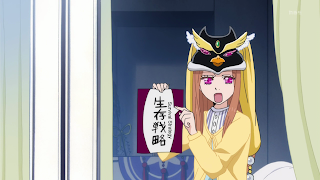 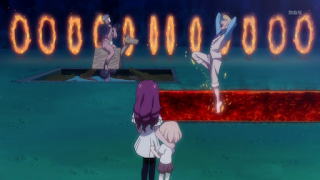 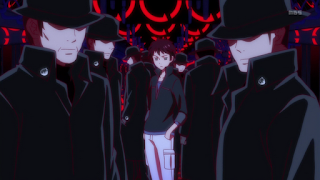 This episode again delves into the past of one of the characters, this time Masako, the obsessed ex of Kanba.  This time we have a nominee for worst grandfather in an anime.  The weird sense of humor in this show was kicked up a notch for this episode.  Renjaku, a new character, has a hilarious encounter with Himari/Momoka.  The increasingly bizarre ways to kill grandpa are hilarious too.  Every time the sychophant assistant spoke it was in English without an accent (props for using native speaker).  It was disturbing to see how grandpa was going to train Mario to be a man. The training was symbolized in a hilarious (and disturbing) way.  Somehow blowfish become a main plot point as well.  It looks like Masako wants to save Mario like Kanba wants to save Himari... but doesn't she have to get on the train at the end?  What did her father lose and what did he gain if he was a "chosen one" like Kanba?  WTF?
Posted by 3mapletrees at 5:26 PM No comments: 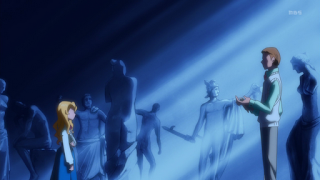 Yuri's father could be the worst father in anime.  He tells her she's ugly and he can't love her because he only loves beautiful things.  But, if Yuri will undergo his artistic alterations to her body, becoming beautiful, he will love her.  Not only does he emotionally abuse her, he physically abuses her (it's all implied with chisels, chiseling noises and mysterious bandages, very effective).  Momoko saves Yuri from sure death by using the magical power of her diary.  Yuri wants the diary to save Momoko...from death?  What Yuri attempts to do to Ringo is shocking.  Each episode becomes more and more shocking.  Topping each previous episode will take some doing.
Posted by 3mapletrees at 1:37 AM No comments: 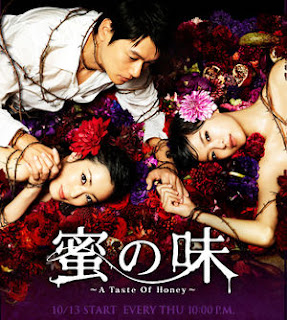 "Mitsu no Aji" is a strange drama.  Naoko (played by Eikura Nana, from "Mei-chan no Shitsuji") is naive girl who falls in love with her uncle, Masato (who was adopted, but still...).  She follows him to Tokyo to medical school with dreams of being with him.  But, turns out he had a girlfriend all along, Aya (played by Kanna Miho who was great in "Guilty" and "Magerarenai Onna").  She is brilliant, cold, and calculating and senses Naoko's feelings for Masato.  Aya's actions in response to Naoko's appearance in Tokyo all scream "get away from my man, he's mine."  We see Aya's secret smiles of glee as she destroys Naoko's hopes of being with Masato.  Why Aya is so threatened is a bit puzzing, since Masato acts oblivious to Naoko's feelings.  The whole taboo angle I admit is part of why I'm watching.  I don't get why Naoko is so into Masato.  I think I just don't find the actor ARATA to be all-that-and-a-bag-of-chips.  He seems a bit old for the part, but since the show takes pains to say it's taking place in 2003, maybe the show will progress to the present and the age thing won't be bothering me later.  I've only seen the first two episodes, but Kanna Miho's performance is really good so far.  Eikura Nana as Naoko is growing on me.  Mizobata Junpei (the current "Detective Conan") plays Naoko's classmate who will probably form the "love rectangle" of the show.  I'm interested in how it's going to play out.  I don't think the show will let Naoko and Masato live happily ever after, so how this is going to resolve will be interesting.
Posted by 3mapletrees at 1:00 AM No comments: 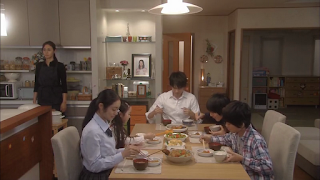 Just watched the first episode of this currently airing show.  It's mysterious, dramatic, and funny all at the same time.  Mita is the new housekeeper hired to help a family who is coping with the recent death of the mother.  Despite her robotic and macabre demeanor she somehow manages to help the family cope with their emotional problems.  Mita is played by Matsushima Nanako.  The father is played by Hasegawa Hiroki.   He is also in another series I'm watching called "Suzuki Sensei."  The eldest daughter is played by Kutsuna Shiori, who played the character Ran from the recent "Detective Conan" drama.  I was surprised to see Aibu Saki (from "Absolute Boyfriend," "Rebound," and "Buzzer Beat") playing the well-intentioned, but bumbling sister of the deceased.  I'm looking forward to future episodes.
Posted by 3mapletrees at 11:49 PM No comments:

"Un-Go" is being simulcast by Crunchyroll and "Guilty Crown" is being simulcast by Funimation.  That makes the whole "noitaminA" Fuji TV block of animation available to at least the USA.  I just watched the first episodes of both shows.  "Un-Go" reminds me of an edgier, semi-supernatural Detective Conan show where murder always seems to follow the protagonist detective everywhere and the mystery is solved in a brilliant, but questionable fashion. Questionable at least to me anyway. I like the character design and the animation looks good.  The studio behind it is Bones which is a the studio that did "Gosick," and "Star Driver."  They also did "No. 6" which was flawed but enjoyable.  "Guilty Crown" has awesome artwork.  The lead female seems to not be wearing very much, but she is pretty.  The post-apocalyptic story seems to be headed towards the "high school student saves the world" direction.  Production I.G ("Sky Crawlers," "Eden of the East") is behind this one.

I have to say that I enjoyed this show a lot.  Each episode was just a half hour, so it was easy to watch.  Yamamoto Yusuke's Tamaki was sincere and over-the-top at the same time.  And Kawaguchi Haruna as Haruhi was cute either dressed as a guy or a girl which made the show more believable (if that's possible with a comedy like this).  Spoiler highlights:  Flashback of Kyouya being recruited into the club.  We get to see a "younger" Kyouya which just means he has different glasses and uniform.  Kyouya visiting Haruhi's apartment.  (I guess I just like the Kyouya x Haruhi scenario.)  Mori playing the harp and the older women going gaga.  All the girls wanting to dance with the "cosplaying" Haruhi.  Mori doing the princess carry.  Awkward accidental kiss between Haruhi and Tamaki (and just on the cheek).  Finally, some doki-doki action from Haruhi. 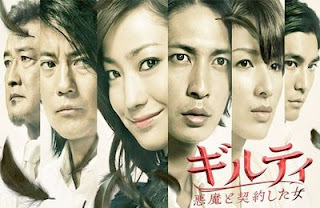 I've been meaning to watch this show for a while now.  Finally got to it and was pleasantly surprised.  It's a good thriller with good acting and an entertaining, but improbable plot.  Kanno Miho (from "Magerarenai Onna") plays Nogami Meiko who is out to get revenge on the people who framed her for murder.  You root for her, even as she exacts her deadly revenge.  Tamaki Hiroshi plays Mashima Takuro, a detective investigating the disappearance of his mentor on the force.  There is forbidden romance since he is the cop and she is the suspect.  The supporting cast is excellent.  I also liked the background music, the ending song (Kono Yoru wo Tomete yo by JUJU) and insert song ("Guilty" by The New Classics).
Posted by 3mapletrees at 10:35 PM No comments: