The SBSFreeVOD channel on Youtube is showing "You're Beautiful" in HD with English subs! The picture quality is great. Episode 6 is missing, however, and I'm not sure why. I really enjoyed watching this show (another one from the Hong sisters). Jang Geun Suk does a really good job as Taekyung.

GL got a little melodramatic with the heart surgery arc...but recovered with a charming last episode that leaves you smiling. There were a lot of memorable supporting characters like Ding Dong, Jae Suk, and Jenny. Pil Joo made you saw "Aww" the whole time since of course, he is the cute, better-for-her-in-reality second male lead. The part at the end where he asks Ae Jung to take his pulse..."Awwwwww." Dokko Jin's TV declaration could be one of the most romantic scenes EVER. This show made me laugh out loud, which is rare while watching anything. I want to watch more dramas from the writers of this show, the Hong sisters. 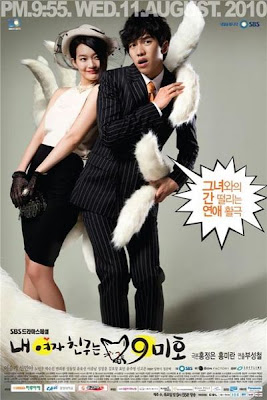 While watching "The Greatest Love" I started to watch the previous Hong sisters drama "My Girlfriend is a Gumiho." Shin Min Ah as Miho steals the show as the charming, innocent, and honest supernatural girlfriend. Lee Seung Ki as Daewoong has good chemistry with her. The side story with Daewoong's aunt and the action director is hilarious. Dongju teacher (played by No Min Woo, a hottie) is a character who could use a little more backstory explaining who/what he actually is. The show didn't make me want to watch it compulsively, like GL did. Maybe I couldn't believe that Daewoong was such great guy that 3 women would want him. The ending was resolved with a deus ex machina which didn't make sense but provided a happy ending. *SPOILER (ALTHOUGH ALL MY POSTS ARE SPOILERS ANYWAY)* Best part of the show was when Daewoong decides to give half of his lifetime to Miho. Awwww.

Note: can't wait for "Heartstrings" the next drama in the GL time slot.
Posted by 3mapletrees at 1:39 AM 1 comment: 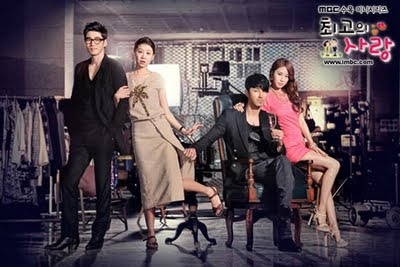 I started watching this recently and boy am I hooked. When I started I didn't know it was a currently airing show. It has come down to me refreshing a certain web site continually for the next episode. It stars Gon Hyo Jin (the struggling newbie chef from "Pasta") and Cha Seang Won (never seen him in anything before). I haven't laughed so much watching a K-drama. It's a romantic comedy about two celebrities, one a superstar, the other a faded girl group idol. The writing and the star turn by Cha Seang Won as egotistical and hilarious Dokko Jin really make this a great show. I'm hoping the show ends well...my fingers are crossed.
Posted by 3mapletrees at 8:53 PM No comments:

ED for "Blue Exorcist" (Favorite part: the simultaneous "take off" dance move also included in the closing of the anime)
Posted by 3mapletrees at 11:19 PM No comments:

Watching K-dramas has led me to the wonderful world of K-pop.  Am I a bit too old to be swooning over young idols with perfect skin?  Yes, but I can't resist perfect skin and slick production!

Cool part: appearing to be one continuous take

Cool part: the soulful singing
Posted by 3mapletrees at 9:12 PM No comments: