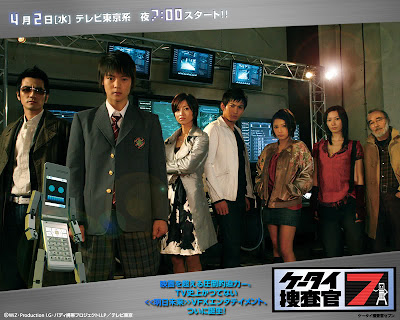 I really didn't know what this show was about when I turned it on, except I knew cell phones were involved. I had no idea watching the first episode it had a walking, talking cell phone as a main character. Yes, I had stumbled onto a kids' show which I just discovered is a "toku" or "tokusatsu," i.e., a live-action effects show of the "Power Rangers" variety. I think it's a step up from "Power Rangers" though. So much production value is in the show, it's like watching a mini-CSI/NCIS (minus all the gore), and includes pretty good, close to movie-quality CGI. It's about a high school boy who gets involved with a high tech counter-internet-terrorist group, and buddies up with a transforming robot cellphone. Sure it's for the kiddies, but I have a feeling lots of adults enjoyed it while it aired in 2008 and 2009.
Posted by 3mapletrees at 11:47 PM No comments:

Here is the PV for the "Ohitorisama" OP by BIGBANG, "Koe wo Kikasete (Let Me Hear Your Voice)." I got it from a great anime blog Random Curiosity.
BIGBANG - Koe wo Kikasete [PV] @ Yahoo! Video
Posted by 3mapletrees at 1:08 AM No comments:

Enjoyable show about an unmarried, very dedicated teacher who seems to be perfectly happy on her own, until she meets a cute new teacher 10 years younger than her. Comedy, romance, and a lot of helping of students ensues. The whole cast is extremely likable. The lead actress is Mizuki Alisa (very pretty). The lead actor is Koike Teppei (very cute). Here is the opening song from episode 1 sung by Korean group Big Bang: 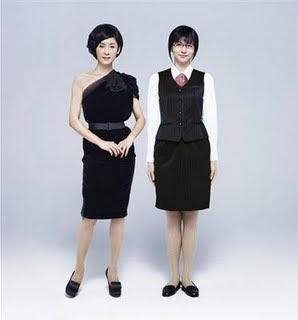 This drama is about a styleless, unfashionable woman (played by Karina) who is suddenly transferred to the womens clothing department at a struggling Bloomingdale's-type store. She gains confidence, and fashion sense, while working under the head of the department (played by Kuroki Hitomi) who was recently hired to put the store in the black. I've watched the 3 episodes that are subbed so far and I am really enjoying seeing all the fashion. It kind of plays like the movie "The Devil Wears Prada" with the ugly duckling transformation and growing mutual respect between the two women. And Kuroki Hitomi looks great in every single thing she wears throughout the show!
Posted by 3mapletrees at 10:19 PM No comments:

woot.com
Posted by 3mapletrees at 10:05 PM No comments:

Just watched "Samurai High School" and it was really fun to watch. I have a new idol Haruma Miura. He is actually so pretty for a guy! Another hottie is Yu Shirota who was in "Hana Kimi" Japan version. It's about a chicken-hearted guy who becomes possessed by his samurai ancestor in times of need, ie, when he needs to be a bad ass. High school plus samurai = fun show. Here is a commercial featuring the lovely Haruma Miura.

On another note, "Kimi ni Todoke" is still my favorite anime this season. Episodes 4 and 5 were pretty heartbreaking. I hope Sawako kicks ass in episode 6.
Posted by 3mapletrees at 9:48 PM 1 comment: 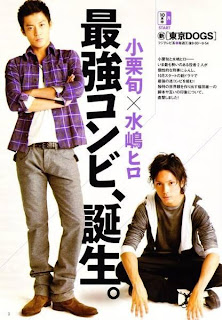 Just watched the first episode of "Tokyo Dogs" starring Oguri Shun and Mizushima Hiro. Both are hot, but Shun with the short hair is really doing it for me! Hiro with the goatee not so much. The tone is uneven. It's a comedy and a police drama rolled into one. I think it the comedy was a little more subtle it might work a bit better. But hey I will probably continue to watch just because of the two of them.
Posted by 3mapletrees at 8:05 PM No comments: