There was a special streamed on December 9 using some fancy 3D VR video that some people couldn't watch properly so it is being made available for streaming in the 2D way from December 16, 2016 to January 10, 2017.   Here is the link: http://www.utadahikaru.jp/hodohodo/  Above is an abridged version on YouTube.  The first half hour is a DJ named PUNPEE doing remixes of her songs, then she answers fan questions (don't know what she said), then she sings “Boukyaku (feat. KOHH)” (with KOHH live) and “Ningyo" from "Fantôme."  Then she is surprised with a cake and looks really relaxed and natural.  At the end of the recorded stream there is also an announcement that PUNPEE's remix of "Simple and Clean" will be on the new Kingdom Hearts game.  I've never played, but it seems like Kingdom Hearts introduced her to a lot of international fans.
There is some Christmas special she is also in that was just broadcast on Japanese TV.  I saw a clip on YouTube and tried to watch some other one but it was copyright blocked.  So it's nice to see some official full performances for free for at least a few days!  It's already December 24 now so only 17 days left!
Posted by 3mapletrees at 6:16 PM No comments:

After years of waiting, Utada Hikaru has a new full album.  I just got it yesterday in the mail.  Had to open my CD player after years of disuse.  The automated opening mechanism of the CD player lid didn't work anymore so I had to manually nudge the lid open.  Listening to it... it is pure Utada.  It's more instrumental, less bumpy and electronic or rockish.  It's a little bit more subdued than her previous albums.  I did look on the internet to check out the translations of the lyrics.  The lyrics involve a lot of references to a lost loved one which probably involves the somewhat recent suicide of her mother.  It is not all melancholy, but sort of gives a wistful, sometimes playful feeling.  Going to listen to it some more.
Posted by 3mapletrees at 7:56 PM No comments:

This anime looks amazing. Just watched episode one on Crunchyroll and can't wait to see the rest of the season. The animation is fluid, the characters are pretty (mostly hot guys), and the show seems to have humor and an engaging story. Plus male figure skating. Boom.
Posted by 3mapletrees at 10:15 PM No comments: 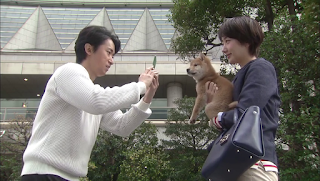 Just discovered this currently airing J-drama, "Sekai Ichi Muzukashi Koi" starring Satoshi Ohno of Arashi boyband fame.  He plays a heartless hotel magnate who cares little about others until he falls in love with a new employee.  In order to win her heart, he changes himself to become a more caring person.  A helpful and wise secretary and faithful chauffeur cheer him on in his quest to win her heart.  It's a ridiculous but nonetheless, charming love story. Just saw episode five and can't wait to see what happens next.
Posted by 3mapletrees at 11:12 PM No comments:

Utada Hikaru is back!

Two new songs were released recently, both are theme songs for two Japanese television shows.  I could only find little snippets of them on Hikki's website here.  http://www.utadahikaru.jp/release/index_e.htm
Posted by 3mapletrees at 9:43 PM No comments:

Beside "Showa Genroku Rakujo Shinjuu" the anime to watch this season is "ERASED."  Satoru is a mild mannered pizza delivery guy/mangaka...with the ability to go back in time to prevent accidents.  Just a few minutes, just enough to say, save someone from being hurt in a car accident.  Crimes that happened during childhood come back to haunt him when his mother becomes involved in a possible recurrence of the crimes.  Satoru goes back in time 18 years to become his 10 year old self.  Can he protect the victims from the past and his mother in the future?  The show is very well paced, almost like a well paced movie thriller. Each episode ends in a cliffhanger that leaves you frustrated that you have to wait another week to see more.  There is something compelling about these little kids confronting these life and death situations with their limited power as children.  The time travel gimmick actually works and gives a sense tension as if watching a live action movie.  Hopefully, the show will not crash and burn at the end, which is entirely possible with these types of plot driven shows.  Waiting for episode 8 right now...
Posted by 3mapletrees at 1:22 PM No comments:


A refreshing change of pace from moe girls and idol shows, "Showa Genroku Rakugo Shinjuu" is a show for adults.  A man is released from prison and he goes straight to a rakugo master to learn the art of rakugo.  The show then flashes back to the master's youth and his training in rakugo.  I only learned about rakugo from watching this anime.  It's a one man comical play where the man sits on his knees on the stage the whole time while acting all the parts himself.  The art is sensational.  It's based on a manga by Haruko Kumota, who is actually a famous BL mangaka.  But this is not BL.  Although with the art style, it feels like it could turn that way very quickly, but never quite does.  There is a close relationship depicted between two male characters, but most of relationship seems to be one man's struggle to compete with another's natural ability to perform rakugo.  There are a lot of long sequences of one character doing 5 to 10 minute rakugo bits, which can be off putting for some.  But I find watching these let's me enjoy a Japanese pastime that I will never be able to enjoy in person.  So far, I've watched the six episodes available.  So far most of the show has been in flashback mode.  I know there will be an upcoming tragedy and the way the show slowly reveals the upcoming tragedy is very subtle.  I look forward to every episode each week.
Posted by 3mapletrees at 1:50 PM No comments: