This is a cute video!  Featuring Van Ness and Ady An from "Autumn's Concerto."

Posted by 3mapletrees at 7:24 PM No comments: 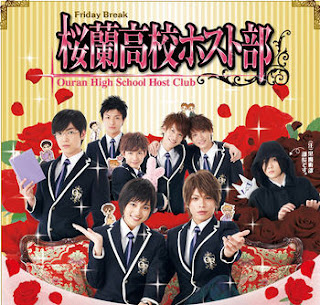 What fans have been clamoring for has finally come to pass.  A live action version of "Ouran High School Host Club" has finally arrived.  It doesn't disappoint either.  The tone is just right, not taking itself seriously, and the cast seems spot on.  Yamamoto Yusuke (from "Tumbling" which I never finished) is Tamaki.  I didn't think he would be a good Tamaki, but he is.  Kawaguchi Haruna is Haruhi and she is cute and likable.  If you wanted expensive scenery, hot guys, and some laughs, this is it.  Looks like there is a lot to watch this season with this show, "Ikemen Desu Ne," and the new "Hana Kimi."  It's kinda weird though, with everything sorta being a redo of something else.
Posted by 3mapletrees at 2:15 AM No comments: 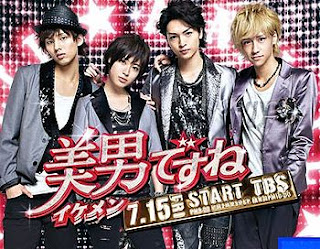 The new Japanese version of "You're Beautiful" has just started.  It's funny how the music is the same, just with Japanese instead of Korean lyrics.  Everything is the same, except at the end of the first episode, when the band has to impress the head of an orphanage in order to hold a charity concert.  It was weird, like the Korean "You're Beautiful" mixed with the must-work-hard-no-matter-what-for-the good-of-of-the-group-no-matter-how-seemingly-useless-it-is thing in Japanese dramas.  The cast is actually pretty good.  I like the lead actress Miori Takimoto.  The three guys are also cute, although the "Jeremy" actor is kind of skinny!  The president of the entertainment group is hilarious with the random English just like in the Korean version.  Looking forward to seeing how this version differs from the original.  Fighting!
Posted by 3mapletrees at 12:07 AM No comments: 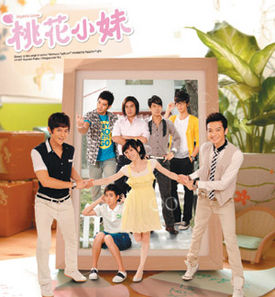 "Momo Love" is about four brothers who overprotect their youngest sister Tao Hua, played by Cyndi Wang, and bully their youngest brother Yu Yi, played by Jing Wong. I think the overprotection by the four brothers was supposed to be funny and it is sometimes, but the tone is played straight most of the time, when it should have been more wink-wink. Two suitors appear for Tao Hua, Jiro Wang and Calvin Chen of Fahrenheit, causing the brothers to plot to keep her away from them.   Jiro Wang played the upright and earnest guy pretty well, but his character didn't show too much emotion most of the time and had little airtime. Calvin Chen did his best with what he had, playing the "bad" guy. The most interesting parts of the series was when the four brothers interacted with each other or when Yu Yi started to have a bigger role way late in the story. The end throws in an improbable baby-switching plot twist out of nowhere, but you can guess how that ends. I really didn't like Cyndi Wang too much. She played cute, clueless, and adorable, but I didn't find her very cute or adorable myself.  Too bad Jiro didn't have a bigger and better part.  No one seemed to learn much by the end.  Only the relationship of Yu Yi and his family changes at the end.  Onward to the next idol drama! 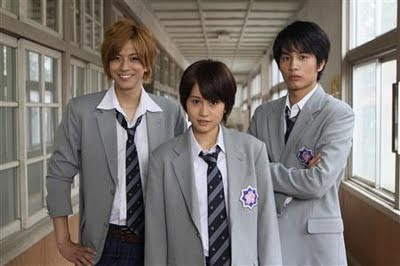 Just finished watching the first episode of this remake of the 2007 series. At first I was turned off because I really liked the first series with Toma Ikuta and Shun Oguri. But this show has it's charms too. Atsuko Maeda plays Ashiya Mizuki with a lot of energy, possibly more so than Maki Horikita in 2007. It's got that "super school spirit/we have to stick together" vibe especially in this first episode. We'll see how it goes. I think it will be a fun show to watch.
Posted by 3mapletrees at 12:37 PM No comments:

It starts slow, but if you give it a chance it's a sweet romance drama. Rainie Yang plays Momo a manga-loving, unsocial college student and Jiro Wang plays MARS a fading idol. They end up living together and poof the magic happens. Both characters are not too lovable at first, but as time goes by, you can't help but like them. It's a total fantasy, but a darn good one. The second love interest Jia Sen played by George Hu isn't much competition for MARS. I wish he had some other "flaw" besides the one he had. It would have been more interesting conflict for everyone involved. It was more fun in the first half, the second half was very angsty, but I guess that is par for the course for any drama. Still, I marathoned quite a bit of it and am a fan of Jiro Wang now. I liked the character of MARS' manager/best friend. The relationship between him and MARS was really nicely shown. The ending was spot on exactly what you want to see and ties things up nicely. Here is the MV for the ending song for the show. What a great song. Jiro and Fahrenheit, where have you been all my life?