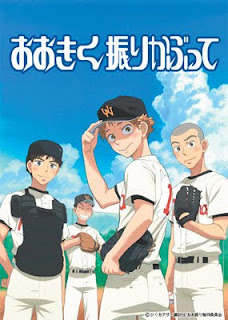 "Ookiku Furikabutte" AKA "Big Windup!" AKA "Oofuri" is a great sports anime about a new boys' high school baseball team made up completely of freshmen. It's mainly about the pitcher, Ren Mihashi, and catcher, Takaya Abe. The pitcher Mihashi was bullied on his junior high baseball team and has really low self-esteem. Abe sees the potential in Mihashi encourages him to become more confident as a pitcher and teammate. It's really nice to see the team learn to work together. And it made me appreciate how complicated baseball can be. I never knew there were so many types of pitches and plays and how much strategy each at bat involves. This is coming from someone who really doesn't like sports. The second and final game takes place over several episodes. If I hadn't been watching back to back, I don't think I could follow the show! That aside, this anime is a really nice, wholesome break from fantasy and violence.
Posted by 3mapletrees at 9:13 PM 1 comment:

I admit I enjoyed "Starship Troopers" from 1997 starring Casper Van Dien, Denise Richards, Patrick Muldoon, and NPH (Neil Patrick Harris). It's got a good looking cast, science fiction, pretty good CGI alien bugs, so cheesy it's good dialogue, and some satirical humor. It's all back in "Starship Troopers 3: Marauder" but with a dinky budget and horrible acting. One actress who has an strange accent I figured was South African (Afrikaans?)since it was filmed there is extra horrible. Casper Van Dien is back, looking pretty good for a decade later and the same writer is back. The low budget shows, but the movie tries to make up with it with extra gore (lots of flying decapitated and/or exploding heads) and gratuitous nudity. The end actually has some giant robot mecha (!) in it and I think if there was a larger budget it would have looked about a million times better and been featured more. I actually even watched the first sequel which sucked horribly and I had low expectations for this one. But, as you watch you get start enjoying it in a guilty pleasure way.

Posted by 3mapletrees at 1:25 PM No comments:

The "Endless Eight" arc of "The Melancholy of Haruhi Suzumiya 2" is finally over. I got so excited with Kyon finally spit out something before Haruhi left the restaurant. I supposed the animators wanted to emphasize the repetition of the 15, 532 "recursions" of 2 weeks in August by making the audience go through eight recursions ourselves, but that was a little much. I stuck it out though.
Posted by 3mapletrees at 7:10 PM No comments: