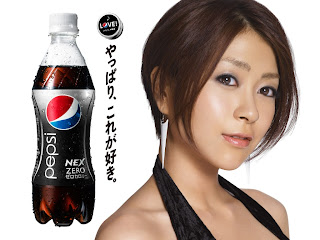 Check out a snippet of Hikki's new jazzy song “Hymne a l’amour ~Ai no Anthem~” featured in Japanese Pepsi NEX commercial at this website.
Update (long overdue):  the commercial has been long gone from the Pepsi site...and is nowhere to be found on YouTube.  Enjoy the pic though and enjoy Hikki's last video on her YouTube channel.
Posted by 3mapletrees at 5:36 PM No comments: 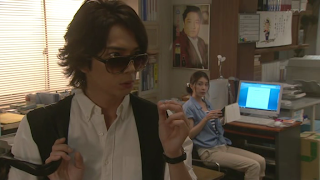 Just watched the first 3 episodes of "Natsu no Koi wa Nijiiro ni Kagayaku" starring Matusumoto Jun of boy-band Arashi and Takeuchi Yuko.  It's a likeable show, which I like a lot better than "Smile" which also starred MatsuJun, but was sort of a big downer which I never did manage to finish.  This is more of a comedy which I think suits MatsuJun better.  The little girl Kobayashi Seiran is really adorable.  I never saw Takeuchi Yuko before, but I really like her acting and her chemistry with MatsuJun. MatsuJun plays a struggling actor living in the shadow of his famous acting father.  I love his hair in the show!  (Squeal.)  I'm not sure about the hat he keeps wearing, but he is still cute.
Posted by 3mapletrees at 6:55 PM No comments:

Posted by 3mapletrees at 9:41 AM No comments:

Why do I keep rewatching this movie?  On subsequent viewings I can see all the foreshadowing of the tragic end.  Al Pacino's performance is a bit over the top, but I think the character of the Michael Corleone becomes more emotional over time due to his guilt over his past life of crime and the murder of his brother.  Sofia Coppola may have been miscast, but she fits the bill as a naive girl who swallows all the lies her father and cousin tell her.  Andy Garcia is hot as Vincent, especially in the scene where he makes gnocchi with Mary.  Comparisons to part 1 and 2 always leave part 3 lacking, but I enjoyed plot with all its business/banking/Vatican politics and the revenge scene at the end set to opera.  Michael gets "pulled back in" and he suffers for it.
Posted by 3mapletrees at 11:59 PM No comments:


I love this channel.  My favorites are when he makes ramen.
Posted by 3mapletrees at 11:06 AM No comments: 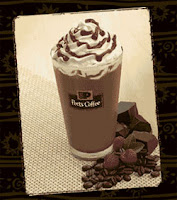 Just tried this today and it's heavenly.  Dark chocolate that's not too sweet, a touch of raspberry syrup, great coffee, and whipped cream.  Highly recommended.  Sort of like a Baskin-Robbins Chocolate Blast made with a See's candy and coffee.  (Never had Godiva chocolates, but had plenty of See's in my life.)
Posted by 3mapletrees at 10:24 PM No comments: