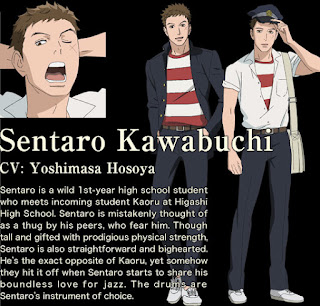 The new anime season has started again. What I managed to finish watching:
Kids on the Slope - What a great show. I looked forward to it every Thursday like I used to with Chihayafuru. Nearly every episode was a gem of animation and storytelling. The best part of the show is the friendship of the Kaoru and Sentarou developing through their mutual love of jazz. The ending was a bit rushed, but did give a satisfying conclusion to the too short 13 episode series.
Tsuritama - This show was a pleasure to watch. The primary colors of the backgrounds really made this show stand out. Again, friendship is the anchor of the show. It's a bit silly and fluffy, but the heroics of the main characters at the end was moving. Plus Tapioca was a cute duck. "Du-ckkk!"
Continuing shows:
Kuroko's Basketball - Had no expectations at all for this sports anime. It's a tournament show but it's not boring. There is a real sense of tension in each game. Each show has some twist on basketball skill that surprises me. Plus good looking guys running around is nice to watch.
Phi Brain - This ridiculous shonen show is somehow bringing me back for another episode. A new arc has started which actually seems like a rehash of the last arc. I may burn out on this but will continue to try to watch.
Space Brothers - I also look forward to this every week. Seeing Mutta face the trials necessary to face to be chosen as an astronaut is really fun. Right now, he is an enclosed space with his would-be astronaut rivals, and being tested mentally and physically.
Hunter x Hunter - Another shonen tournament show. Each episode is such a surprise and I don't know what to expect. Plus Gon and Killua are so likeable. Hisoka's fixation on Gon is a hoot too. Schwing?
Right now, I'm trying out episodes of the new season. Hoping Natsuyuki Rendezvous will be the josei anime I'm looking for.
Posted by 3mapletrees at 7:37 PM No comments: