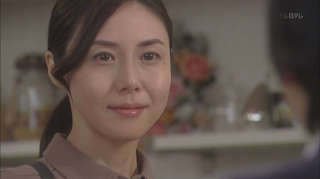 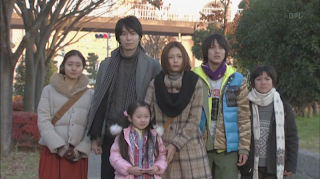 OMG.  I think I used up half a Kleenex box on this episode.  I feel a bit manipulated, but hey, the show did a good job of it.  Mita gets the children to want and accept Urara as a guardian figure.  Mita also convinces Urara of her own worth.  There is a scene where Mita slaps Urara around to get her to quit being nicey-nice which was a bit disturbing.  Props to the makeup team who showed the red hand prints on Urara's face in a subsequent scene.   Mita's farewell dinner is when the waterworks started for me.   Mita smiling at all the family members was a heartbreaking scene.  The final topper was Kii's tearful farewell to Mita.  Whoa.  Everyone is happier due to Mita's interventions and Mita is a bit happier (and less self-abusive) due to the love of the children.  It's funny how she can detect wrong thinking in everyone else but herself.  Great show, and great acting by all the kids and Matsushima Nanako, who plays Mita.
Posted by 3mapletrees at 11:40 PM