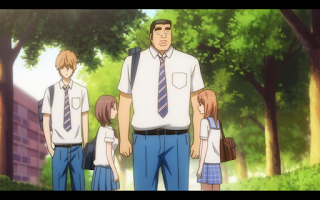 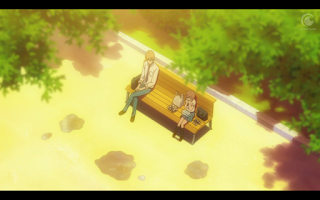 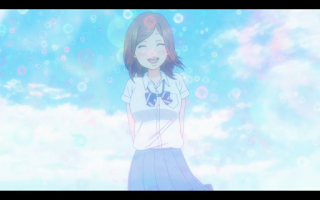 These two episodes introduce a new character, Saijou Mariya.  Takeo is assigned to be the anchor to the class running relay race.  Saijou is called in at the last minute to fill in as the second to last leg of the relay.  However, she is not exactly a gazelle.  Takeo volunteers to coach her running.  Yamato is jealous, but tries to keep it under control.  Saijou falls during the race, but Takeo encourages her and manages to win the race even after her fall.  His coolness wins Saijou over.  But she finds out about Yamato.  She still hangs around him a bit and calls him out alone...to confess her desire to his "disciple."  A confused but honored Takeo says yes.  But others, (AKA Suna) can see through Saijou.  He warns her she is only hurting herself by hanging around as a third wheel.  She eventually confesses, and Takeo turns her down gently.  Saijou cries in the park and Suna consoles her with tissues and words of encouragement.  Wouldn't it be nice if they got together?  Hmm.  Takeo realizes how much she loves Yamato and reassures her that she is the only one for him.  Takeo is troubled that Saijou is hurt, but Saijou is still friendly with Takeo the next day which makes him happy.  What a well-adjusted, healthy ending.  Anyway, I sobbed when she sobbed so it was a moving episode that I empathized with.  Suna is again some sort of love guru.  He needs a love interest, fast.
Posted by 3mapletrees at 12:13 AM No comments:

Takeo, Yamato, Ai, Suna, and Hayato go to MM Land.  Yamato wants to avoid the MM Land jinx that couples who have a date there will break up.  Hayato plans a group trip so she can avoid the jinx since it's a group outing.  But in reality he has his own agenda.  Hayato plots to get Takeo and Ai alone together so that Ai can confess to Takeo that she loves him.  He tries very hard and manages to separate the group so that they go around trying to find each other while he gives false info as to where he is. 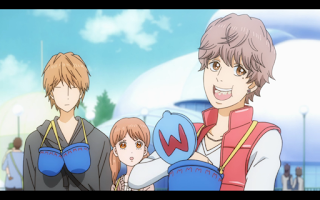 Ai and Takeo spend some alone time together and she mentions how he had said something about her looking like a flower when they were kids.  He doesn't remember, but yet picks out the same flower again to compare her to years later.  What a guy. 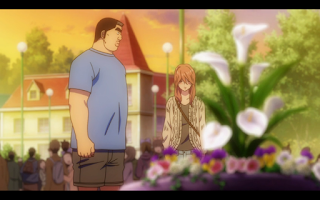 As they wander around trying to reunite with the others, Ai is tempted to confess.  But as the long awaited sparkly parade is announced to begin shortly, she decides not to and to tell Takeo to find Yamato.  Takeo runs off.  I guess the parade reminded her of how Yamato was so much looking forward to seeing it with Takeo.  She tells Hayato she'll never confess.  I think it's a good choice.  Nothing good can come from inserting herself into the perfect and innocent couple that is Takeo and Yamato.  Ai advises Yamato when she appears to forget about the MM Land jinx, and trust Takeo.  Yamato gives Ai a cake to thank her for her all her advice.  I think that is proof Ai made the right call.  Yamato and Takeo are so innocent! 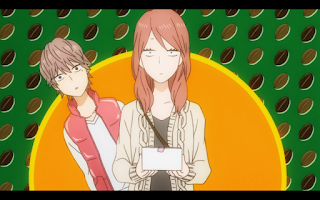 Hayato decides he just has to win her over on his own power and he probably will in the future!
Posted by 3mapletrees at 12:38 AM No comments:

Takeo and Yamato surprise Suna for his birthday by taking him to the movies and to the mountains.  Apparently, he forgot it was his birthday and had no inkling of why they were inviting him everywhere.   I find it hard to believe anyone can forget their own birthday, but I suppose if anyone could, it would be Suna.  At first, Suna doesn't know how to react to the surprise.  Takeo says he should just be happy and Suna agrees.  It's a touching moment. 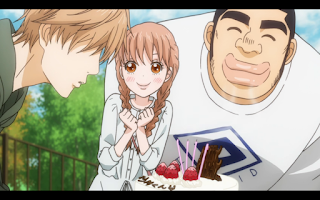 The episode then turns toward Suna's sister, who has a crush on Takeo.  A man appears to find out just who this Takeo that Ai loves. 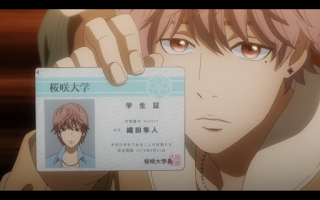 Hayato Oda confessed to Ai, but she let it escape that she loves Takeo.  Hayato chases Ai to her hometown to scope out Takeo and win Ai over.  Takeo mistakes Suna for Takeo in a funny moment.  Ai tries to stop Hayato. 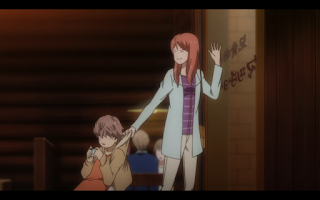 But instead Hayato manages to make a group date out of going to MM Land (like Disneyland?).   In a touching moment, Takeo lets Hayato stay over at his apartment.  His parents are infinitely cool about a sudden guest.  Hayato reveals why he likes Ai so much.  Later, he lets Ai know his plan for the group date is to get Ai alone with Takeo so she can confess, move on, and get with him! 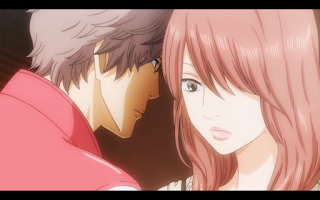 A bit more drama in this episode.  I can see the tears coming for Ai.  But Hayato seems like a good guy.  At least he really seems to love Ai.  What will MM Land look like?
Posted by 3mapletrees at 7:15 PM No comments: