"Rose of Versailles" in English

Could have knocked me down with a feather when I read that "Rose of Versailles" is going to be streamed with English subs on Viki and released on DVD by Nozomi Entertainment in 2013.
Here's the trailer!

Thanks to Nozomi and Viki!
Posted by 3mapletrees at 10:36 PM No comments: Links to this post 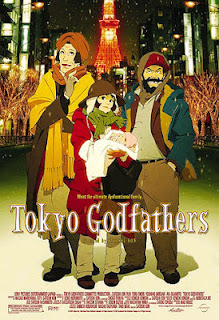 I've always meant to watch "Tokyo Godfathers" but never got around to it.  I found this on cable and it was a wonderful movie.   Frankly, the look of the anime wasn't appealing to me at first, but these characters really come to life, and really people aren't as pretty as in most anime, right?  The realistic look to the movie sometimes even led me to forget it was an anime.  The real star of the movie is the writing.  It's serious when needed, and hilarious at unexpected moments.  I laughed, I cried....really.  It was like a Frank Capra movie.  And I think I read that this is either based on or is really similar to an old movie.  Three homeless people work out their own family issues as they search for the mother of an abandoned baby.  Satoshi Kon co-directed this movie, the recently deceased anime director behind "Perfect Blue" and "Paprika" both of which are recommended.  Both "Perfect Blue" and "Paprika" are good movies is well, but aren't the heartwarming comedy/drama that "Tokyo Godfathers" is.  Really an unexpected find.
Posted by 3mapletrees at 11:20 PM No comments: Links to this post