"Stars Align" is a show I did not expect to enjoy so much. It's about a high school boys soft tennis club (had to look up what soft tennis is). The team basically sucks and the student body president threatens to disband the club if they don't start winning. The captain, Toma, gets his old acquaintance, Maki, who is naturally athletic, to join the team to inject some needed mojo. Maki revitalizes the team with his natural talent at the game and some much needed shaming of the heretofore lazy team members. The tennis is not the most interesting part. It's the backstories of all the team members who all have some type of family situation going on, even delving into some serious issues like child abuse. The animation is really fluid and all the characters are cutely drawn. Although I did find it hard to tell the boys on the team apart since they all have such round faces, but after watching for five episodes I can tell them apart now. It is heartening to see the relationships between the club members blossom as they confide in each other. The subtle expressions and mannerisms that are animated really take this show to another level. Don't forget to watch after the ending credits, there is always an shocking scene. Also, the ending credits have had some press because it turns out some the dancing was "copied" from some dancers on Youtube. The dancers are now credited. I still enjoy watching the ending credits even so. Hope all the show ends well because I look forward to watching this every week.
Posted by 3mapletrees at 12:49 AM No comments: Links to this post

"The Poe Clan" by Moto Hagio 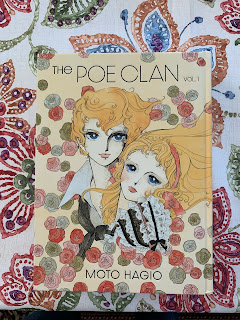 Just got this in the mail! I love Moto Hagio's style of drawing and bought her other manga available at Fantagraphics.
Posted by 3mapletrees at 10:21 AM No comments: Links to this post

Heya🧟‍♀️ My concert video is now available on iTunes and Netflix worldwide. The English subtitles for Netflix are official (the lyrics are all translated by me, and I edited and rewrote most of the talking bits) https://t.co/41k3kRiG6b#LaughterintheDark2018

Posted by 3mapletrees at 6:23 PM No comments: Links to this post