"Castle in the Sky" 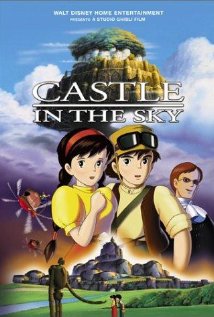 I've been meaning to watch this Miyazaki film for a while and I finally did.  I wasn't really expecting anything and I was pleasantly surprised.  I went on a Miyazaki binge and bought "Nausicaa of the Valley of the Wind," "My Neighbor Totoro," "Castle in the Sky" and "Whisper of the Heart."  All are new to me except for "Totoro" and I really enjoyed "Nausicaa" as well.  I have to admit I thought "Nausicca" dragged a little bit in the beginning for me, but "Castle in the Sky" kept me interested the entire time.   I think it's because the two main characters Sheeta and Pazu are so darn likable.  Both have a never say die attitude and are so capable they are even able to easily fit in with a pirate crew.  They are constantly on the run so I guess that's why the pace is good.  The art is beautiful and the same glorious semi-European fantasy land setting seemingly in most Ghibli movies is here as well.  The music was also very beautiful.  The ending was a bit predictable, but I guess there was no way around it given the environmental message of the movie.  I was surprised how the character of Dola evolved in the movie and I thought Cloris Leachman did a really good job with her voice acting for that character.  James Van Der Beek ( yes, Dawson) and Anna Paquin (remember the little girl in "The Piano"?) do pretty good jobs as the voice actors for Pazu and Sheeta.  I have only seen the dub version, but plan to watch the Japanese version with subs the next time I pop this into the PS3.
Posted by 3mapletrees at 11:11 PM No comments:


Kudos to the maker.  So hilarious.
Posted by 3mapletrees at 10:58 PM No comments: