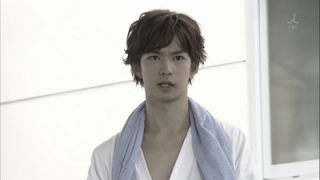 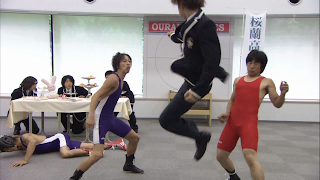 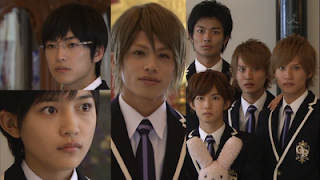 In this episode, Honey-sempai is kidnapped by the newspaper club who is about to "out" Tamaki's family status.  Wrestlers appear as the henchmen and they periodically do unsettling exercises. Honey kicks ass with his major judo abilities.  Tamaki's family situation as the unwanted illegitimate grandson is explained.  Honey and Mori's curious relationship is explained.  Kyouya's lot as the the third son of his magnate family is shown.  We get to see Tamaki recruit a rather deep-voiced and serious Honey with cake, a bunny puppet, and some words of wisdom.  Mori meets one of his fans and gets some screen time and lines.  Tamaki's grandmother gives Tamaki an order.  Haruhi learns about Tamaki's resilience.  The episode ends with a shocking revelation...what is going to happen to the host club?  A fun episode that reveals more details of the lives of the club members.
Posted by 3mapletrees at 10:36 PM